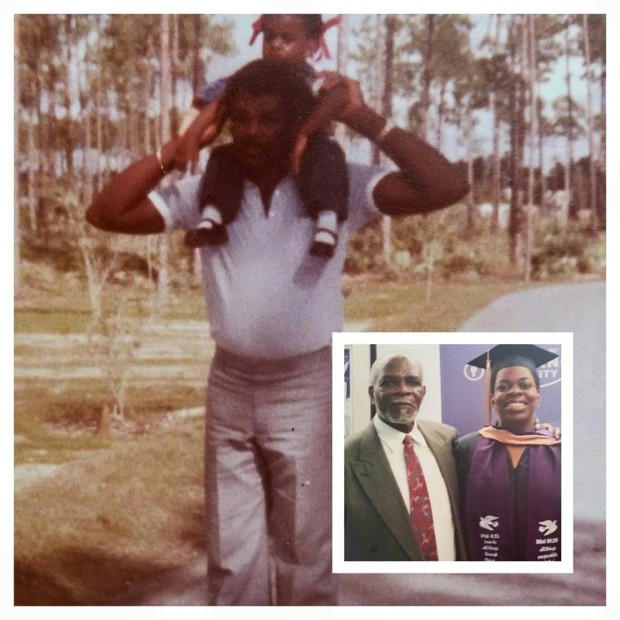 (Me on dad’s shoulders. Me and dad at graduation when I earned my masters…..something he urged me to do.)

As I sit here on Father’s Day reminiscing about the lion of a man who was and is my father, the memory of his tall and commanding presence still thrills me. Little did he know, I learned things from him that I carried into my adult life. He didn’t have to verbally share everything in order for me to commit things to memory. Watching him live his life was filled with so many teachable moments that became the bedrock of who I am. There are a few that are and will always be paramount to me.

1. Always put yourself together
When it was time for my father to go out somewhere, be it church, weddings, and other social gatherings he was well dressed. From head to toe, my dad would have his shirts finely pressed, dress pants with a crease so sharp it could cut a finger, and his shoes were Florsheim leather hard bottoms that were always shined. Because of my father’s height (6’3) and average build, there was absolutely no room to look sloppy. When I go to events where I’m speaking or social events where dressing up is mandatory, I’d take a page out of my father’s book and meticulously prepare my wardrobe just as he would.

2. Go to work, say hi, do your job and go home
Dad was a master carpenter who did finish work for many of the buildings in Manhatten and Brooklyn. I can imagine the competition for that kind of job. Being inside and not laboring in the elements was a choice position in the world of construction. My father would tell me the stories of being one in a handful of black people on the job and how it was necessary to be early, have your work be beyond perfect and get the heck off the job site when the bell rung. Hanging around long enough to catch the eye of the foreman could easily lead to unnecessary conversation. Conversations like the foreman asking about your family, your home, or whatever else. If the foreman perceived that you were doing better that he was, it could lead to getting moved around the job site then suddenly on the sidewalk and replaced with two laborers that could do the work of one senior carpenter.

Yeah. It was rough during my father’s time and working generation.

As for me, my generation’s work culture is different. Conversation is encouraged. Presenting yourself as friendly and accommodating is the way of life and determines your career growth. People want to work with people. Not robots. But, remembering how my father was laid off three days after giving his foreman a ride home in his old Cadillac (a month fresh from moving our family from Brooklyn to Miami in the late seventies) was a harsh lesson that everyone you work with is not a buddy. And no matter how friendly the environment, one should act accordingly. When you get to work: say hello, share a funny story/or current event over coffee, do your work and go home. Nothing more. Nothing less.

3. Speak up
My father was never short on words.  He was never afraid to defend himself or make his stance known. And because of that, people loved and respected him. I always look for ways to keep the waters placid. I’m a Christian. That’s my job. Then there are the times when I get aggravated and Fred Jackson shows up. There is an art to speaking up, then there is an art to just dropping the brick and letting the dust settle where it may. I’ve witnessed my dad dropping that brick and not holding nothing in or back. He didn’t lose sleep in the aftermath. He just kept on living. I’m still learning to finesse that trait while putting some Jesus on it. The hearts and feelings of others are important to me. If anything, I learned it’s imperative to speak up (gently of course) at the right time and don’t hold anything back.

“Tracey if your job asks you to travel, do it!” he said as he sipped a hot cup of coffee.

My father was an entrepreneur in his later days. He put his business name on his white Ford Econoline van and started doing small carpentry jobs in the city. He enjoyed working for himself. If anything, he was living his dream. He was always pushing me to do something different with my life. Travel, get more education, do something and do anything so that in the future I’ll be taken care of. Create opportunities and take advantage of them when found. He would always push me not to settle but to do something great with my life. I will say that if it had not been for him and his pushing, I would not be where I am today telling the world about his greatness.

As I sit here writing this piece before church on Father’s Day 2016, I realize how much he deposited into my upbringing. Not so much with money and gifts but by how he lived his own life.

Thank you, dad. I love you always.